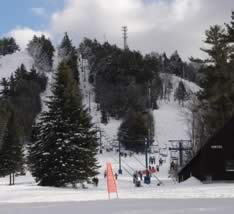 On Tuesday I went with Adam, Dave, Amy, Tzalli, Audrey, and Saara to Pats Peak in southern New Hampshire. I hadn’t been skiing in a while and wanted to see how much I remember of it. We left early in the morning and Adam and I came back in the evening, the rest of ’em stayed for the night and skiied some more the next day. We got what Jeremy tells me is a great deal — $54 for a full day of skiing including rentals. My skis and I did not get along, but that was only a problem the few times I fell out of them, which did not happen until after lunch.

Amy went off to ski school to be humiliated by five year olds (poor Amy!) while the rest of us took a few runs. Ski runs are classified in difficulty with a color and shape. I guess color because its memorable and shape in case you’re color blind. Dunno. Anyway, at Pats Peak (and I think most places) green circle was easiest, followed by blue square (“intermediate”), followed by black diamond (“expert”) which for some reason here was a purple diamond, followed by double black diamond (“deadly,” or something to that effect). We started with green circle.

It quickly became apparent that: 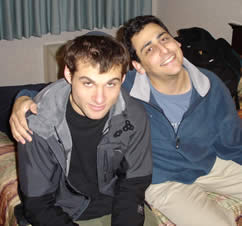 After a bit of hesitation I took on a black diamond, and by the second run I felt completely comfortable. The double blacks were another story. The one Adam and I went on was a simple trail with a bunch of jumps, a few of which I was silly enough to go over, one of which I was going fast enough that I actually jumped over, and promptly fell down the other side and flat on my face. And it took a good ten minute to get my boots back into the stupid ski bindings. Did I mention how my skis and I fought? The other double black we looked at was a 70 degree vertical drop consisting of lumpy ice covered by a light layer of very powerdery powder. We saw some employees (instructors?) take that one on, but didn’t see them finish, as we were down the mountain and going up a lift and they were still nowhere in sight.

The best trail of the day came about as a fluke. I noticed that one of the greens went all the way around and looked to be the longest trail. Adam and I, having done the rest of ’em several times and getting a bit bored, decided to give it a shot. It was pretty easy, but then Adam discovered a small trail, unmarked, leading off into the woods. Because we’re daring, or perhaps stupid, we followed it. And followed it. And followed it. Between trees, in a stream bed, around curves and past branches, and we ended up out behind some houses, a bit off the mountain. We had to hike back up, in ski boots. It was a blast. The second time we did it it was a bit less exciting and we made an early exit, to avoid leaving the moutain again. But it was pretty cool.

At the end of the day Adam and I drove back and then had dinner with Kelli. It was a fun experience, and I want to go skiing again. And again! And again! Hey, if I keep this up, I might finally have something to put on my birthday wish list! 😉

4 replies on “The official end of mono: skiing at Pats Peak!”