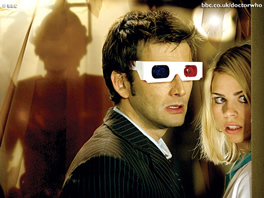 The British cultural phenomenom Doctor Who was revived last year following a sixteen year hiatus. On Saturday it finished its second series run. For those not up to speed on their scifi television (or Brit pop culture), Doctor Who tells the story of a alien time traveler who jaunts across space and time in a ship disguised as a 1960s police box. He is generally accompanied by one or more “companions” to whom he reveals the wonders of the universe as his ship inevitably leads him and his travelers to space/time friction points where things have gone wrong. The Doctor has a strange obsession with Earth and with his own brilliance, and he battles various intersteller creatures and creations with sundry disruptive aims using his wit, ingenuity, and superior technology.

The Doctor comes out of this entire experience incredibly emotionally damaged, even for a man who has lived 900 years.

The brilliance of the current run of the show is that we meet the Doctor in a strange and volatile state, and soon learn that he is the last of his kind; his entire species, the Time Lords, having been destroyed in a great cosmic Time War with their most dangerous and ruthless enemy, the Daleks. It is later revealed (or at least strongly implied) that the Doctor himself was responsible for the final destruction of the Daleks and, faced with a terrible choice, saved the universe by sacrificing his own people. The Doctor comes out of this entire experience incredibly emotionally damaged, even for a man who has lived 900 years. Yet he continues on, purposeless, but doing his job, such that it is, mending space and time as he is led by his TARDIS to breakage. We meet him as he stumbled upon Rose Tyler, a simple London shopgirl with a high school education, and whisks her away with him to go galvanting across the universe.

Soon enough the Doctor and Rose face challenges and danger, and as she discovers more about him, she brings out the best in him. The Doctor makes a powerful and electric connection with Rose as he is captivated by her innocence and simplicity, while Rose is rocked to her core and her mind is opened to the power, beauty, and mystery of the universe. The two bond and grow and travel the timestream, popping in and out, agreeing, arguing, fixing problems, causing them. In their hubris, the Doctor, who is, despite what he may lead you to believe, *not* all-knowing and *not* all-powerful, makes mistakes, huge mistakes, powerful disruptive mistakes. In the conclusion of series one, the Doctor and Rose are trapped aboard a space station 200,000 years in the future after having discovered that the insane Emperor of the Daleks has also survived the Time War, and has lie in wait for hundreds of years, building a new army by harvesting humanity. The Doctor is once again faced with an impossible choice, as he must set off a weapon that will destroy all of Earth and its entire population of billions in order to wipe out the Daleks once and for all.

But this time, the Doctor cannot do it, cannot once again cause such incredible destruction and pain. He tricks Rose into falling back through time to London 2005, and then sits in wait for his own destruction at the hands of the Daleks.

Rose, for her part, believes in the Doctor and refuses to abandon him. She claws at the inner core of the great ship TARDIS, using good old 21st century mechanical power (in the form of a huge tow truck) to break open the powerful machine and stare into its heart, into the brilliant white light that is all of time and space. Rose drinks it in, and in the process becomes a god, sees everything that the Doctor sees and more, and wills it changed. She saves the Doctor and saves the Earth and wills the Daleks gone, and they turn to dust. But the power is too much for anyone to hold, it is not something ever meant to be, and it is going to kill Rose.

And that is where we leave series one. We leave it with wonder and hope, with love and respect.

In the last seconds of her life, the Doctor comes to Rose and kisses her, takes the energy of time and space from her, frees her from her fate, takes it upon himself, takes her away, and then, dying and using that old Time Lord trick, regeneration, transforms before her into something new and different, another man.

And that is where we leave series one. We leave it with wonder and hope, with love and respect. We leave with Rose having learned and grown and become something more then she was, no longer needing to live at home with her Mum, no longer needed to ask so many questions and be afraid and refuse to accept what she sees. Rose has saved the world, and now she can do anything. No longer a simple shop girl, Rose has forsaken her previous life for a higher calling, and she gives herself to the Doctor, her whole being, knowingly and willingly. And the Doctor accepts her, and he gives himself to her, and he is, at least in some small way, healed.

And then there is series two. And then there is more, grander, neverending hubris. Characters whose personalities change drastically from episode to episode with no explanation but that different writers hadn’t read the scripts for episoders that were to come before. We have the Doctor willing to forsake everything, to leave Rose, all to save a random woman that he has known for only a day. We have Rose once again pining for her lost father, we have more of clingy boyfriend Mickey, we have a silly obsession with getting Queen Victoria to say “we are not amused.” And then we have the ending, oh the ending, which takes us back to the beginning, except that it doesn’t, because Rose is still the new Rose, she still has all of those new experiences, she is still grown and changed and better and different, she is still devoted heart and soul to the Doctor, to being their for him always, but no, it is not to be, she is ripped from him, taken away to an alternate reality la-la land where her mother and father are back together, she is back with boyfriend Mickey, and the Doctor is once again all alone. If series one was about finding your way, about growing and becoming your own person, about discovering the wonders of life and charting your own path and all that, series two is almost about going backwards, about being a kid again, about reliving your old fantasy life with your dad alive and your happy little home and success and money and all those things you realized with the Doctor that you never really needed, that you can accept people for who they are and things for what they are and you can have back that past that you didn’t really want to begin with.

And the Doctor, what of the Doctor? What of his struggle, his plight, his burden? Rose is the special one, the specialist of all his companions, his last link to the world, and he loses her. And he collapses a star to create the energy he needs for one last transmission across the dimensions, one last chance to say goodbye, and even then, even then he can’t do it, he can’t really let go, he can’t finally say “I love you.” He has to go on, ever go on, ever alone. No time to pine, no time to look back, on to the next adventure, on to the next travel, on to the next companion. Lonely, oh so lonely, but never show it, never be truly vulnerable, never really open up to someone completely. The Doctor, the Doctor and his TARDIS and the whole of time and space, limitless realm for exploration and excitement, and back on the trail he goes without another glance.

Do you get the impression that I liked series one a lot better than series two? Because I did. Series two was okay, but it wasn’t the same. And I’ll be back for series three, and I’ll be back for the spin-off show, _Torchwood_, but the longing for it isn’t there, not like it was after the brilliance that was series one, after episodes like World War Three and Fathers Day and The Doctor Dances and The Parting of the Ways. If you haven’t seen _Doctor Who_, you should. Its cheesy and campy and funny and brilliant and deep and meaningful and just *fun*. And I enjoyed series two a lot. Not as much as series one, that’s for darn sure, but still a lot. And I hope when they come back with series three, perhaps they’ll recapture some of that spark and beauty. And the series finale two-parter did tug at the heart strings, it was handled well, but it just didn’t feel right. I think Rose knows the Doctor loves her, I think he knows it too. I think its too painful for him to lose her, I think he is going back to his old ways, putting up the front that he doesn’t care as a defense mechanism, because he has been burned so many times. But the Rose story is left so different than I thought it should be, so unsatisfying. And that’s what bugs me.

A new series, new adventures, a new companion, and a new chance to tell new stories, to do things differently, and to learn more about the Doctor and the pain he carries. Is is alright, after all the criticism I’ve leveled here, for me to continue to be hopeful? I think it is. I think I will be. I think this show, begun in 1963, coming back in 2007, still has plenty more stories to tell.

6 replies on “Doctor Who”