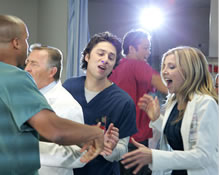 Yesterday Scrubs aired their 123rd episode, titled “My Musical” and revolving around a woman with a mysterious illness that causes her to hear everything in song. You may recall that Buffy did an ingenious musical episode during their sixth season that brought up a lot of important character development and conflict that would otherwise have been difficult to portray on screen. Scrubs, which often looks to Buffy for inspiration, isn’t quite as able to do that (in part because of the nature of the show, in part because of the half hour format), but that doesn’t make the musical any less fun to watch.

I kept thinking, as I watched various characters break into song and dance at the slightest provocation, that I was hearing songs from various Broadway musicals but written in the style of Avenue Q, the amazing Tony-winning musical about puppets entering the world after college. Not to mention, the woman who plays the patient (and can really sing) seemed strangely familiar. She turns out to be Stephanie D’Abruzzo, who originated the role of Kate Monster in Avenue Q (and who I had the privilege to see on Broadway — twice). Remarkably, the people responsible for some of the lyrics and songs on the show were actually Robert Lopez and Jeff Marx, the creators of Avenue Q! 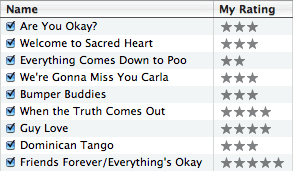 I generally liked the later songs more than the ones in the the first act.

Scrubs has been underappreciated for its entire six year run, but I’ve always been able to count on it (when its not on hiatus for very long periods of time) to provide a weekly pick-me-up with a good dose of humor and sweetness. While the show (and the network) were contemplating ending their run this season, apparently the musical episode re-energized a lot of the key players and they’ve decided to stick it out for one more year. Although it is always good to end a show on a high note, I’m glad _Scrubs_ is sticking around a little while longer. While this show has done many things, one thing it has been able to consistantly avoid is jumping the shark.

3 replies on “Scrubs: My Musical”