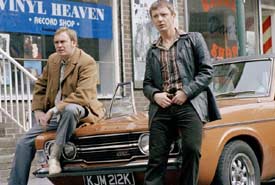 Sam Tyler finds himself transported to the 70s (or perhaps stuck in a coma) in BBC hit _Life on Mars_.

Rumour has it [ _sic._ — they’re Brits] that the excellent 70s cop drama _Life on Mars_ will begin transmitting its second and final series sometime next month. I’ve dropped _Studio 60_ like a rotten watermelon to make some room in my schedule for my favorite British time-travel cop drama. I have mixed feelings about the Beeb’s decision to keep the show to a two season run (for a total of 16 episodes). I’m happy that they’re willing to try interesting new things, see them through to a logical conclusion, and not keep them on well past the expiry date. And I understand that the particular gimmick used in this show just can’t go on and on forever without resolution. But I’m sad because the show is so well done and I’m sure there are more good stories that could be told if the show were to stick around for another season. Plus 16 episodes isn’t even one full American season! (In fairness they *are* full hour episodes, rather than the 40-45 minute shows we air here).

On a related note, does the BBC understand that, given the opportunity, I would gladly pay the full UK television license fee if it meant I could download all of their television content from bbc.co.uk? I’m sure I’m not alone.

One reply on “Life on Mars returns”