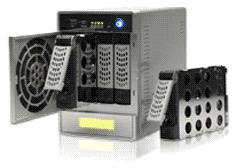 I’m getting a bit low on hard drive space and had a very strong desire to replace my large general-purpose Linux server with a smaller dedicated appliance (it was an irrational desire, but these things happen and you just have to go with them). After much agonizing I picked up an Infrant ReadyNAS NV+ and decked it out with four 500GB hard drives and 1GB RAM. I chose the ReadyNAS over the competition because it got good reviews, is fairly powerful and customizable, you can provide your own hard drives and RAM, and instead of being a scary black box, is actually a hackable Linux-based device.

So far everything is working great. It took several hours to build the 1.5 TB RAID, after which I setup my shares, my access controls, and my snapshots, and now data is rsyncing over from my old server now using the ReadyNAS’s built in rsync server (nice!). Only problems so far are that its a bit noisy compared to my nearly silent tower, and things are moving awfully slowly on the copying…I can get a good 10-12MB/s over gigabit when talking from server to laptop, but ReadyNAS to server is getting closer to 2.5MB/s. Which is pretty much unacceptable, but doesn’t square with published test results, so let’s hope it is just an anomaly.