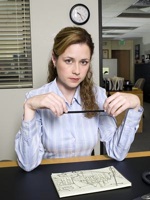 Yes, I know what The Office is, but I avoided it because it was a British transplant and it was all about the awkward office interactions, and I can’t stand that, and it was getting cancelled anyway, until it apparently didn’t.

Saw two episodes, by happenstance, in the past two days. (Um, thanks Hulu beta?) Loving it. And it’s the first show I’m picking up in a while for which watching it out of order doesn’t feel like a cardinal sin.

Plus, dropping Bionic Woman frees up a spot. 🙂

2 replies on “A bit too real-world”