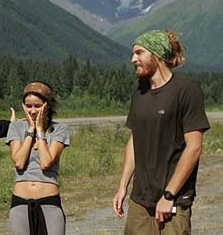 I’ve never seen this show before. I just watched the last episode of season 12 on the YouTubes. It was great. It looked like a really fun show, running around the world doing various strange tasks, being exhausted beyond measure, competing in actual challenges rather than sitting around on an island or in a house bickering all the time. There is some strategy involved, now that there have been 12 seasons and you have a fairly good idea of the sorts of stunts they are going to pull, and often you can figure things out by just taking a second to think before acting rather than rushing in screaming. I really want to get on this show!

Much of what made it seem so neat was the winners, Rachel and TK, who I knew within the first five minutes were the people I wanted to see come out on top. They were just so…happy. They were totally in the game as a game, loving every minute of it, be it climbing a glacier or flying in a helicopter or riding in a speedboat or even digging through crabs to find a clue. The other two teams were serious and angry and conflict-prone and making mistakes. Those two were just so exhilarated and happy to be there and in love, it was infectious.