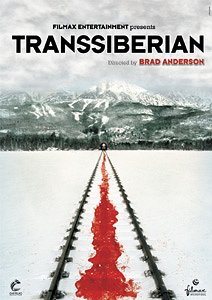 American missionary tourists on a trip through the bleak landscape of Siberia by rail. The train itself tries to become another character, but doesn’t really succeed. A thriller that isn’t totally thrilling, this film starts of slowly and builds slowly and then ends really quickly, degenerating from intriguing and edgy to slash and bash, with a denouement that leaves you utterly unfulfilled. I guess what happens in Siberia stays in Siberia?

It is hard to describe much of the plot without giving things away, but the advertising copy is fairly accurate:

A Trans-Siberian train journey from China to Moscow becomes a thrilling chase of deception and murder when an American couple encounters a mysterious pair of fellow travelers.

I know it sounds like I didn’t enjoy the film, but I did, at least until the last 20 minutes, and then I didn’t anymore. I’d compare it to Sunshine, a 2007 sci-fi thriller with a similar problem: some great, slow setup of the characters and environment, edgy and intriguing, and then it all goes to hell in utterly random and implausible ways at the end.

Or perhaps more accurate is to look to something like A Simple Plan, the excellent and disturbing film that spotlights so clearly how one bad action and one big lie, left uncorrected, can build and compound and snowball out of control, leaving in its wake misery and pain. That’s what should have happened in Transsiberian, but it didn’t, and I’m not really sure why.

One reply on “Transsiberian”