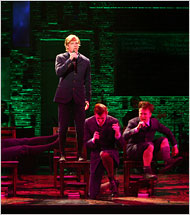 I went in purposely knowing nothing about this show, but it helps a lot to have a little bit of context. A retelling of a play written and set in 1890s Germany, Spring Awakening recounts the experiences of a group of young teenagers coming to grips with their sexuality in a highly repressive society. They swoon, they dream, they giggle, they lust, and they explore their own physicality, all with minimal understanding of the meanings and potential consequences of their actions.

And also, they pull out microphones from their 19th century costumes and burst into rock ballads whenever they have cause to tell the audience what they’re feeling.

The goal, apparently, was to retell an old story as it might be told today, and, perhaps, to be the next Rent. They did win the Best Musical Tony, which isn’t nothing…

There is a lot I could say about the show. I could go into great depth about the ups and downs of the book, the changes made compared to the original (which was banned in Germany). I could comment on the energy and spark and talent of many of the actors involved. I could mention the cool set and inspired lighting choices. I could wonder at the point of the gimmicky audience seating on the stage, and of the chorus members who sat with them but never did more than provide background vocals. I could talk about how the rock songs are catchy but jarring, and how easy it is to get through one and realize you have no idea what was said and, frankly, can’t tell if it was really useful in moving the plot forward.

But what it comes down to is the story. Highly controversial and incredibly socially relevant in 1891, Spring Awakening has little resonance today. And where one might have expected some sort of attempt to connect the struggle of the teens in the show to our modern times, not a shred of social commentary is forthcoming. This is a musical that was revised and rewritten and extensively workshopped for seven years, and yet what appeared on the Broadway stage is a show where nearly half the songs seem superfluous (and sometimes, downright irrelevant), the story is utterly predictable, most of the characters are two-dimensional, and, in the end, the themes are simple and banal. Sure, it sucked back then, for a variety of reasons, and adults often treated children very badly, and lives were ruined due to, oh, the lack of widely available and effective birth control. So? The year is 2008, the place is New York, and the audience is us — what are you trying to teach us? What are you trying to say?

Nothing, it seems. A powerful and moving story with nothing to say. And that is a darn shame.

Update: See also this review from KCRW’s Theater Talk, which offers similar sentiments. As well as a (spoiler-filled!) NY Times review which is more charitable.