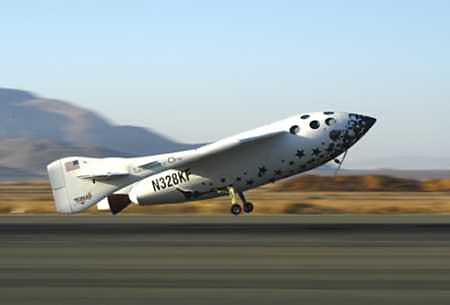 For two generations, the feats of space have been reserved for those test pilots and scientists who passed government muster. Now, the vapor trail of SpaceShipOne’s hurtling ascent hangs in the air, an indelible cosmic path for anyone with the money and moxie to follow.

The Christian Science Monitor has one of the better stories about this remarkable achievement, and NPR has the first of what will be many images. I watched the flight on a BBC internet stream, but if I could have I would have been there.

Like the barnstormers who crossed America in the early years of the 20th century, promising a future when any person could get on a plane and fly across the country, today’s space entrepreneurs speak about space with a sense of manifest destiny. Now, more people might listen.

NASA has held back space exploration long enough. SpaceShipOne and the 26 other entrants in the X-Prize competition are but the leading edge of a huge storm that will make life really exciting in the next few decades.

I decided long ago that my ultimate dream was to reach the Moon, to walk on it, to see its wonder, to look down at Earth with awe. I believed then, and continue to believe now, that it will be possible within my lifetime. And at a time like this, at a time when everyone is so focused on bickering and the on the many ills of the world, good news and optimism and a challenge and hope for the future is most welcomed.