Tonight is the second of this year’s Pachanga dances, put on by the international club for a purpose I really can’t quite fathom. I mean, I understand the whole dance aspect, but not why International Club does it…I think they get money from the A-Board because it is a “cultural” event. Heh.

Today Brandeis held their debate tournament, which I did not judge in because I forgot it was coming, despite numerous emails. Whoops. The consequence of a debate tournament is that lots of students from far away spend the night in our dorms. We had a group from Brown here on Cable 1. The group decided to have a party. 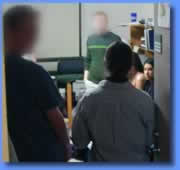 Now, North is a “dry quad,” although our floor does have signs stating quite clearly that we are a, “Wet Floor.” When a buddy of Abe’s from BU started vomiting after an extended stay in the Mods, BEMCO was called, and along with them of course came campus PD. Dana Baker, quad director, was also called up, I guess. She patrolled the hall, noticed the bit of a party in [**Name Withheld Due To Request**]’s room, and did her duty as a quad director, making them throw out the booze and taking names for some sort of “write up.” [Ed: False information about punishment removed.]

I found the whole thing quite humorous. I was in the room a few minutes prior but luckily I was in the hallway when Dana came by, and consequently I was not written up. Not that I was drinking anyway. So I did what any good geek with a weblog in my position does, I took pictures.

Our last Pachanga resulted in probably a dozen visits to the hospital, including my buddy down the hall Roman, the frat boy. I’m sure this one will keep BEMCO and Waltham Deaconess Hospital quite busy. Fun. Meanwhile I sit here and code… I’m really pathetic.