Skip to content
This review contains spoilers for Battlestar Galactica through episode 3×04 and for Razor. 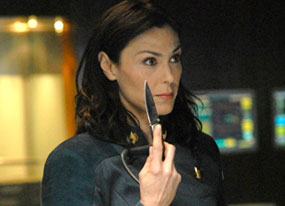 Are we supposed to see Cain as a flawed but sympathetic human being? Because I can’t. Major Shaw? Yes, a sympathetic character — young, inexperienced, dead mom, led astray by a powerful force. But not Cain. The transition was too sudden, the decisions too rash and single-minded, the act of CIC brutality too disturbing, and the justifications too feeble for me to see her as a sympathetic character. I choose to ignore the coda and disbelieve the notion that Adama could have taken her place. But I could see Kara in Shaw’s place. Wasn’t she, after all, a surrogate Shaw to Cain in the time prior to Shaw appearing whole cloth in Razor?

Look back at Resurrection Ship. Look at how Cain was then: her strength, her will, her intelligence, her sensibility. She was measured. She was cold. Very often, she was right. Look at Kara’s eulogy. Do you feel like maybe Shaw should have delivered it?

So we get Shaw, and we get Kara, and they fight with each other, because they’re so similar, and we get Lee, and okay, he’s not a bad commander, and we get the rest of the people, and they’re all props, and we get flashbacks, and it’s all filler. It is all things we already know. There is nothing, nothing new here. Why bring it all back, why go to all the trouble, without making something new? If you’re doing a story about Shaw, do a story about Shaw, whoever the frack she is. But don’t do a rehash of Cain.

My opinion of Battlestar Galactica: Razor? Mediocre. A missed opportunity. There was so much potential here. I’d have loved to see a four hour mini-series called Battlestar Pegasus. Instead we get more of the same, ever since they left New Caprica, ever since the show lost its way.

One reply on “Battlestar Galactica: Razor”