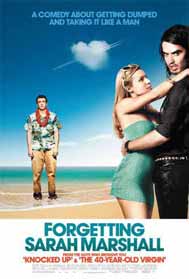 The first Apatow film I’ve seen, Forgetting Sarah Marshall is about a guy dealing with an abrupt break-up with his TV star girlfriend of five years. He escapes to Hawaii, they run into each other, hilarity ensues.

There were many funny moments, and just as many pointless ones. Several of the supporting characters were introduced for unclear reasons (just to add some more quirk?) and didn’t go anywhere. Our hero Peter’s Hawaii fling, Rachel, never feels fully fleshed out, although she doesn’t lack for charm. Nice about the film is that none of the four main characters (Peter, Rachel, Sarah, and Sarah’s new boyfriend, Brit rocker Aldous Snow) is generically good or bad, but each has realistic motivations and individual personalities.

I am always impressed and amused with the degree Kristen Bell will allow her life to be satirized. In this film she plays an up-and-coming actor on a crime drama that is abruptly cancelled after three seasons. There is a particularly funny scene over dinner during which her character attempts to defend her decision to star in a ridiculous horror film about killer cell phones. “It was the right choice for me at the time,” she pleads.

Also amusing? Peter’s Dracula rock opera with puppets, in the vein of Avenue Q. But even with that, and with a few interesting bits of unexpected insight into the tribulations of an up-and-coming Hollywood star, the film didn’t reveal any deeper truths or lasting messages. It’s one of those romantic comedy-type films, set in Hawaii, and it doesn’t strive to be more. Which is fine, but in the end that’s all this movie turns out to be — fine.