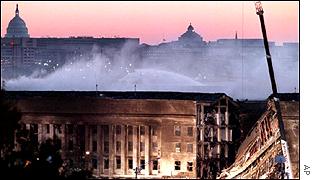 Mimi Lester is a 14 year old student in a school just down the street from the World Trade Center site. Today, she was interviewed by BBC World, and her words just filled me with so much hope. As best I can remember:

We’re all people, and just because they have been brought up believing things that we don’t believe in, we shouldn’t bomb the civilians.

She lives in the wreckage, military is all around, she has to show ID to get home after school, she and her 7 year old brother are subjected to searches before they can enter their neighborhood. Yet she still worries about the lives of people half a world away.


What also struck me on the BBC this morning is that they go all around the world for their reports on all kinds of conflicts. In the US they never do that, except on NPR. I don’t think I like US media that much.


In other news, the US is killing a bunch of innocents.


Oh, and now Busy is saying there will be terrorism by anthrax. Fun.