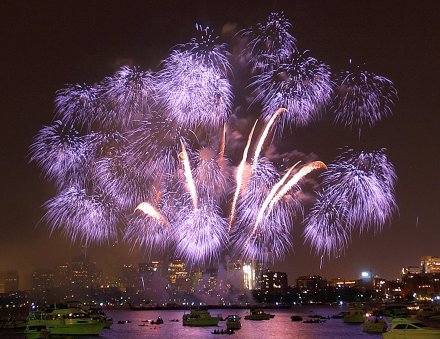 Longtime readers (err…and friends) probably are aware that one of my favoritest things in the world is fireworks. The fireworks I saw tonight are probably the best I have ever seen. Now, mind you, they weren’t as captivating as seeing fireworks at, oh, lets say seven years old up in Lake Arrowhead, but unfortunately (fortunately?) I’m not longer seven, so it’s gonna be hard to top that.

Tzalli and Adam were tasked with buying us a picnic, so they went to Victory and picked up a bag of tortilla chips and some orange juice. The hell? Last time they do the shopping…

Kelli, Dave, myself, and the two aforementioned bad shoppers then drove to Harvard Ave. and took the T to Copley. We staked out some real estate by the Charles at around 2ish. Dave went and picked up Amy for her day off from camp and they (eventually) returned. We all hung out, talked, read books, commented on the people, etc. until 9 or so, at which time Adam and Tzalli, with another burst of genius, picked us up and moved us down to another spot that was about half the size.

Eh, whatever. It was a better view of the sky. So we played some Taboo until the fireworks started. I don’t really know how to describe fireworks. This was a pretty long show with a lot of neat ones that I’ve never seen before, my favorite being (yeah, watch me try to describe this…) a rocket that launches with no trail, explodes into several large blobs of white specks while launching a bunch of little capsules, and then the capsules ignite into a whole bunch of small clusters of which pinpricks, lighting up the sky with a shower of sparks, kinda what I imagine the sky would look like with no atmosphere. Anyway, the fireworks show was awesome, the company was awesome, and good times were had by all.

Oh, and we celebrated the birth of America from the place where a lot of it happened, and all that. Patriotism, yay!

*Edit (6/15/05):* I am not the author of the above photograph, and do not own the rights to it. I didn’t have the right kind of camera back in July to take that photo, not to mention I’m probably not yet a good enough photographer to do it. Looking around online I cannot seem to find it anywhere, although I have a nagging suspicion that I may have appropriated it from the _Boston Globe_. Sorry for the confusion.