On Saturday Mat and I hiked Mount Moosilauke, one of New Hampshires “4000-footers.”  The weather was warm (40s), although the day was overcast and the summit was fogged in.  We got a late start after a wrong turn (kids, bring maps!), so we were a bit concerned about daylight.

A trail report from a few days earlier indicated that it would be smooth going, but apparently we mis-read it, because everyone else on the mountain that day had either skis, snowshoes, or both.  We had neither, and for the first 3+ miles almost ever step resulted in snow up to our knees.

We held out hope that as we gained elevation (and colder weather) the base would be harder-packed.  That was the case eventually, but the slow going coupled with our late start made us decide to turn back prior to the summit.  It was an adventure regardless, and on the way down we got in a lot of “sledding” on our behinds, which was a blast.

On campus things are winding down as finals end and summer begins. At Harvard I’m finishing up a big web project for the OpenNet Initiative today before I head out for vacation tomorrow. It’s also weird that fellows are slowly trickling out, because although I’ve only been here for two years in July, in that time I’ve seen tons of change at Berkman, including a tripling (or so) of our staff and the establishment of two major ongoing projects, a few shifts in focus, a move to a new building, and two batches of fellows (some of whom stay for only one year terms). And in a few weeks all of the summer interns are going to start pulling in, taking up every nook and cranny and making the Berkman atmosphere even more interesting. Oh, and also I joined the HLS softball team!

On the Northeastern front things wrapped up a few weeks back and Shaina is already home in California, working at Maintex and hanging out with her theater geek friends.

At Brandeis there was another brouhaha about another possibly racist/definitely offensive publication, which I got to watch from afar. Someone has learned something in the previous few “incidents,” but I’m not entirely sure what. Finals are happening there as well, which means my last major link to Brandeis, Aaron, is soon heading off to grad school at Rutgers (yay Aaron! but boo, far away :().

And in other happy news, Alwina got a much-deserved and long-overdue promotion to Assistan Provost in charge of unifying grad student services, a fun, interesting, and probably difficult task. We celebrated last week over Italian.

I’ve been enjoying the outdoors a lot, playing some frisbee (although it reveals how incredibly out of shape I am), going camping at IOCA’s trip to New Paltz, NY, and kayaking a couple times. On Saturday Jeremy persuaded me to skip out on some work and head off to Waltham to kayak at a place I never knew existed, and we went six miles round trip, headwind both ways, up to Moody street and back. It was fun. Soon the water will be warmer and there will be some swimming to be had as well.

On the home front the new washing machine is working great and I even installed it myself, things are generally clean and functional, I’m loving my Apple TV, and the only thing Igor and I are having trouble with is our wildly divergent conceptions of what temperature is habitable. 🙂

Tomorrow I’m off to Cancun for a few days, then to California to visit with family and watch Jessica walk at her theoretical graduation, and then back with Jess in tow for a bit of Northeast adventuring before returning to work in two weeks. I’ll take pictures, of course, and eventually post them. In the meantime below you can see a few kayaking shots and hopefuly today I’ll get up some old Berkman pics as well, a couple of which I’m somewhat proud of. So stay tuned, stay warm, and get outside and enjoy the beautiful weather! Yesterday Jeremy and I drove to Concord, NH to kayak on the Contoocook River. It was a fun little adventure on a nice calm river, and, while we arrived fairly late in the day, we were able to kayak a couple miles upstream to a beach and then back again before closing time. Next time we’ll have to plan more than a few hours in advance and make reservations for one of the 5 or 10 mile journeys. 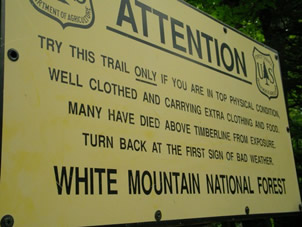 Two weeks ago I set out with Igor and Yoni to hike Mt. Washington. While I’ve been on things I would call hikes, I’ve never gone on something this serious or difficult. I was woefully underequipped, with the wrong clothing, wrong equipment, and not enough water or food. The one thing I did have is an excellent pair of hiking boots and, thanks to Yoni, the right kind of (wool) socks, and my feet came out of the adventure feeling great, even if the rest of me didn’t do so well.

Mt. Washington is the highest peak in New England at 6288 ft, and while that might not mean much compared to other areas of the country, it is a very legitimate and potentially dangerous hike. It is also the location of the highest recorded wind gust in the world for a surface weather station, measuring 231 mph in 1934. On the day we arrived the weather was cool and clear for summer, and our chosen hike took us from Pinkham Notch up 4238 ft to the summit by way of the steep 4.1 mile long Tuckerman Ravine trail, which travels up the “headwall” of the ravine. I did not bring nearly enough water, but luckily the hiking companions we met up with were overprepared, and I was able to score some extra water, food, and a walking stick. 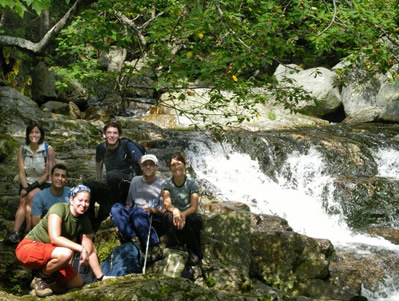 My choice of shorts and a light shirt paid off for the beginning of the hike, which was fairly easy going up nicely sloping trails. After a mile or so, we hit the fork that would take us up Tuckerman Ravine, and things got far more steep. The climb was still a pleasant one for another mile and a half or so, at which time we stopped to rest and eat. As we ate the sky opened and the rain started, another thing I was not well prepared for, with my jacket that was not especially good at keeping water out and my short pants.

We continued on, although I was slowed down for a bit by the food, which made me feel bad and gave me a headache (and there are no bathrooms along the trail). We kept going, and as we got higher fog started to roll in, the rain began to intensify, and the wind picked up. The last half mile was awful, and at times I had to stop to rest, out of energy to go on. Our group seperated into three pairs as we climbed the last section at different speeds and slowly, oh so slowly approached the top. When we finally got there, I was dismayed to see that we were only at a parking lot, and there was still a bunch of stairs to climb before we finally reached shelter. I was exhausted.

At the top we entered the visitors center, which was not well heated, and changed clothes for those of us who had things to change into, while attempting to dry off from the rain. Unwilling to made the descent in the crappy weather and the condition of some of our party, we bought a ticket to send one member of the group down on a van to pick up a car and come back up for the rest of us. While we waited for her to go and come back, and weather intensified, and the park service closed the road, saying it was unsafe to pass. 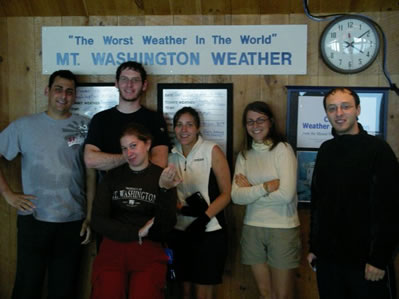 We were now trapped at the top of the mountain with the visitor center nearing closing time and the only way down to hike in the awful weather — or hitch a ride. Luckily the more female and cute members of our party were able to score us seats in the pickups and vans of the few remaining people at the top who had yet to leave. A very slow descent via road and we were finally, finally at the bottom, where the weather was a bit better.

This wasn’t the end of course, as next we had to drive for three hours to get back to Igor’s house, at the end of which I felt absolutely terrible and had the most awful painful hiccups, and then, after that, another half hour home.

Oh man, it was awful, aggrevated of course by me being out of shape and underequipped. Now that I know what I know, would I do it again? Damn right I would. But first I need to head out to REI or EMS and stock up on the right equipment.