Yeah, I know the trip was in December and I’m posting the final penultimate update in April. Next maybe I’ll finally write about my trip to France in May…of 2006. Family is welcomed to comment with any CR details I’ve forgotten in the interim.

When last we spoke, we had concluded our time in Guanacasta and taken a treacherous(-ish) mountain journey to La Fortuna, around Lake Arenal, which looks (from afar, through the fog) sort of like this: 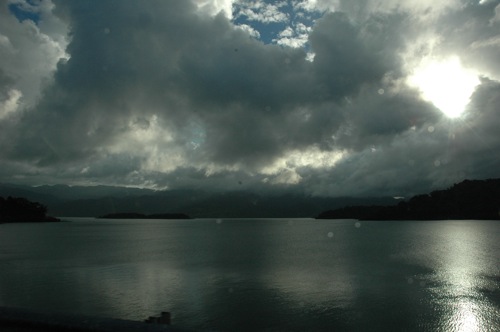 Along the way we made a couple stops, both Germanic in nature. First we found ourselves at a home/gallery of an interesting German artist who had spent many years as a dancer prior to eventually finding her way to Costa Rica. She had an interesting life story, but we only got snippets out of her and I’ve forgotten what we did learn. She had a bunch of dogs and a great view of Lake Arenal and in general seemed pretty contented. 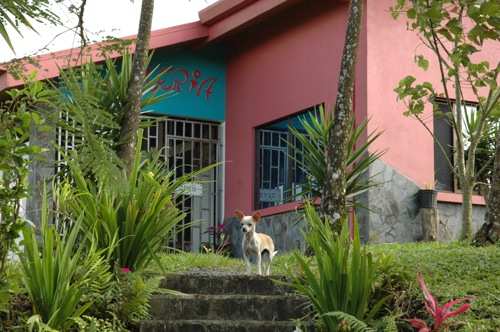 We thought this was a one-off thing, but soon discovered that there is a decent-sized German expat community in the region. Near the end of our journey I demanded we stop at an eclectic German bakery, where we got some Kaffee and I had a yummy Apfelstrudel. 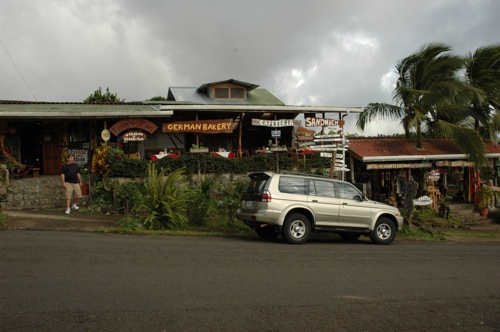 Pictured above: the German bakery with attached gift shop, dad, and our mode of transportation. Not pictured: the cat that kept us company while we dined, the scuba gear hanging on the wall, and the sign by the bathroom that proudly declared, “Clean Toilet.” Pictured below, meine strudel (the rest are on Flickr). 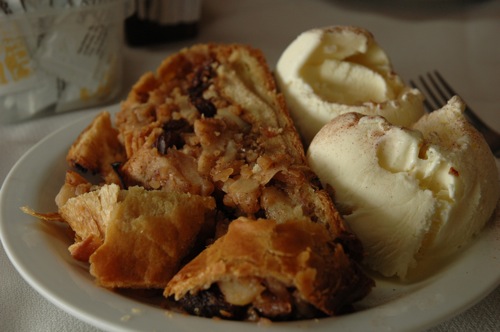 Back on the path, we relied on our helpful Garmin to lead us from road to road to road. No, seriously. Turn left on road. In 300 meters, turn right on road. Then, make the next left on road. None of the roads have names! Natasha informs me that mailing addresses are given relative to landmark, e.g. Jose Schmo, red house past the church, Townsville. I readily believe this, because all directions were given that way, and the landmark most often used was this church or that church, even when suggesting a different, more eye-catching marker might have made the place easier to find. 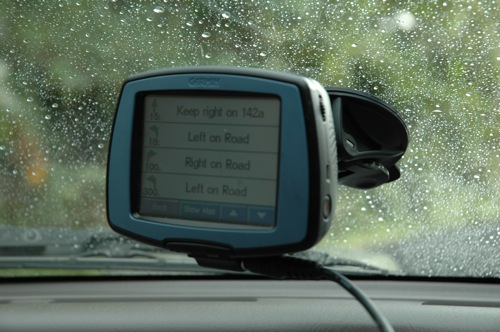 Anyway, we eventually got to our hotel. It was very elegant, but lacked air conditioning. It is very important, when you lack air conditioning, to have good, secure bug screens on the windows. No such luck. I can only speculate that the locals make peace with the mosquitos, perhaps through some ritualistic sacrifice in a corn field every 10 years, and in exchange get to be free of bites. No such luck for us. Literally hundreds of mosquito bites, everywhere. Itchy and red and painful and they just kept coming, in spite of various bug sprays and lotions and folk remedies like hot springs. We tried our best to not be miserable and enjoy the surroundings, but it was tough. Clearly we were doing something wrong on the bug protection front, but I’m not sure what. 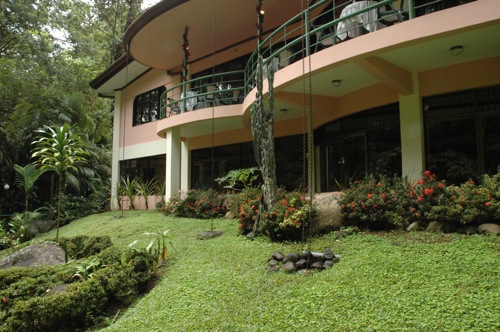 Behind the hotel was a natural gorge carrying hot water from somewhere higher up. Other amenities included a derelict mini-golf course, a fancy-ish dining room with decent food, and a neat well-maintained trail through the woods on the property. So the ants went marching, one by one. 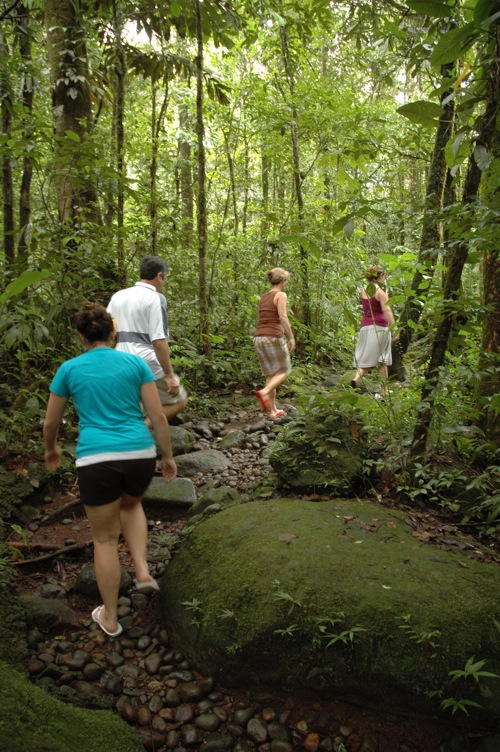 If you’ll indulge me, I’d like to take a slight detour here to remark on a certain Quixotic quest that I found myself embarking upon early in our journey. As you’re probably aware if you’ve ever been with me in any sort of dining situation, I’m quite a fan of the ketchup. Now, Malcolm Gladwell backs me up on this:

[K]etchup may well be “the only true culinary expression of the melting pot, and […] its special and unprecedented ability to provide something for everyone makes it the Esperanto of cuisine.”

This may be, but I had a heck of a time finding good ketchup when I was in England. And that was nothing compared to the problems I experienced in Costa Rica.

Here’s the thing, and I’m sorry to say it but it sure seems to be true, based on my admittedly limited sampling: Costa Rican food is bland, the culinary arts underdeveloped, and the palate undiscerning. There, I said it. Now beat me up.

The food is fine, but it quickly gets boring. Everywhere there are sodas (food stands) serving the “typical plate.” If you’re lucky, I guess, you get “super typical.” Beans and rice, a basic salad or canned vegetables, and your choice of meat. If you go to a restaurant, you can get a typical plate that is slightly more upscale, or try something else on the menu that inevitably ends up resembling and tasting like a typical plate. For condiments, they have salsa, and their salsa is universally bland, a thin sauce. They also have unnaturally yellow butter and a standard cheese of strangely slimy consistency.

Anyway, back to ketchup. With no fun salsa of vegetables or fruits or neat spices or anything else to be found, and with burgers and other meaty or potatoey dishes to be eaten, I needed myself some ketchup. But Costa Rican ketchup is just not ketchup, its another form of thin, nasty-tasting tomato salsa. I tried getting salsa at various places, including the hotel restaurant, and was universally dissatisfied. We eventually found a Burger King, however, and I saw my chance. Sure, we ordered a Quesoburguesa and fries, but that was just to get at the ketchup packets, and then ask for more, and possibly freak out the counter staff. For you see, they had Heinz! 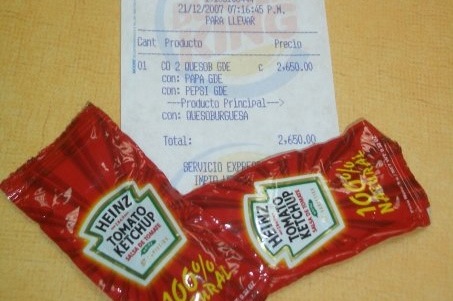 I’ll never go hungry again! Alas, the excitement was short-lived. Their Heinz is made in Costa Rica, is “organic,” and tastes decidedly local, and not at all like typical Heinz.

Okay, that went on for way too long. I should probably stop here, I’ll finish up with our last couple *real* adventures in Part 4. (I know! The pain! When will he write it? In August?)

Next time: Rafting and a brilliant waterfall, and then we’re done.